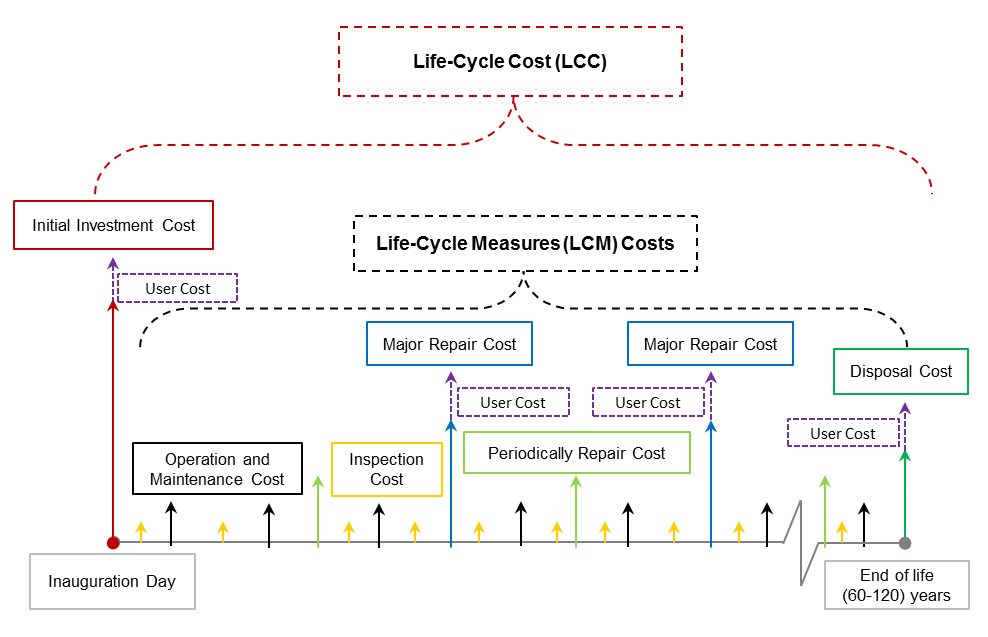 Definitions and Investigations
Life-cycle costing, sometimes called LCCA, is a decision support technique that enables comparison of LCCs of an array of alternatives that may all fulfill a certain function, but differ substantially in LCC and/or life-span (Safi et al. 2012a). Agencies are under severe pressure nowadays to maximize efficiency, ensure the optimum use of taxpayers’ money and integrate LCCA into their procurement policies. However, a major challenge for bridge procurers is to incorporate durability specifications, fairly and robustly, in the increasingly popular D-B contract forms (Bakker and Volwerk 2007).

Decision-makers could employ LCCA to specify the most LCC-efficient of an array of alternatives. However, robust techniques for interpreting and integrating results of LCCA in real bridge procurement decision-making processes are lacking. It is important to acknowledge in this respect that the objective of LCCA is the minimization of the bridges’ LCC not LCM costs. Agencies regularly update design standards and qualification requirements to minimize LCM costs of their infrastructures. Not necessarily the most LCC-efficient bridge design is the one associated with the least LCM cost or the longest life-span. The most LCC-efficient proposal is the one associated with the lowest equivalent annual cost (EAC), i.e. annual INV and LCM costs over the proposed bridge’s life-span.

Bridge LCCA and BMSs have long been subjects of intense interest, many countries use BMSs for effective management of their bridges (Helmerich et al., 2008), and numerous transport agencies have made strenuous efforts to improve use of LCCA in bridge investment. Several recent contributions have also provided useful tools for this purpose, inter alia the ETSI project (reference), and NCHRP Reports 590 (Patidar et al., 2007) and 483 (Hawk, 2003). Nevertheless, LCCA has been mainly applied to support decisions related to the management of existing bridges in many BMSs (Ozbay et al 2004), and rarely to support decisions related to investments in new bridges, despite its potential to deliver substantial savings (Markow and Hyman 2009). Obstacles hindering the implementation of LCCA in bridge investment and management, discussed by Safi et al. (2012b), include the common treatment of BMSs and LCCA as separate rather than strongly inter-related complementary tools. This limits their utility for decision-support, because most BMSs include databases with information that could effectively reduce the inherent uncertainties in assessing LCCA input parameters, which is a key challenge.
Bridge LCC categories
Several LCCA systems and cost breakdown schemes are available (NCHRP Report 483 and ETSI project). The basic calculations in the breakdown schemes are similar, but the cost categories included vary. Figure 1 displays the typical bridge investment phases in Sweden and events incurring direct costs, defined according to notations of the Swedish Bridge and Tunnel Management System (BaTMan), the main tool used in Sweden for bridge management. Further information about the events, costs and various applications of LCCA for bridges can be found in Safi et al. (2012b and 2013).

As shown in Figure 1, an agency’s costs for procuring a bridge include all costs incurred during the bridge’s entire life-span. The capital investment cost of a bridge is the total amount of money required to put the bridge into operation, which can be divided into pre-contract and initial investment (INV) costs. The former are all costs paid by a procurer from the time when the bridge is an idea until a contract is signed with a contactor to construct it. The INV cost is the total amount of money paid from signing the contract until the bridge’s inauguration. The costs required to keep the bridge serviceable from inauguration until demolition are here named life-cycle measure (LCM) costs. The LCC that should be considered in a LCCA of new bridges should include both the INV and LCM costs. Actions required to ensure that the bridge maintains its designed function during its designed service lifespan should be included in the LCM. Strengthening (STR) actions should not normally be included in the LCMs since they are intended not only to restore the original capacity of the bridge but to increase it. In addition, it is difficult to anticipate possible STR actions in an early planning phase and their inclusion might in many cases bias the entire LCC analysis since they are very costly. However, they should be considered in a case where the bridge is designed to be strengthened later on due to, for example, a present budget limitation. The LCM could include inspection (INS), operation and maintenance (O&M), repair, replacement and rehabilitation (RRR), recycling, demolition and landscaping (RD&L). Contractors under D-Bs normally offer bids for the INV cost, which includes costs of construction materials, construction work, detail design and the contractors’ profit, while LCM costs are eventually incurred by the bridge procurer.